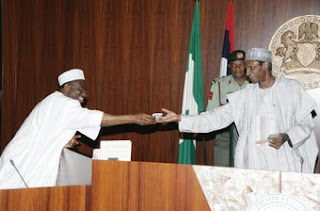 For Nigeria and Nigerians, these are very interesting times.

With a president who has been AWOL for almost 80 days and a clique of hangers-on who have decided NOT to do the right things even when the right things are as simple as writing a letter (or a communication) to the Senate President. Things had got so heated up that people were afraid of a breakdown of law and order and probably a breakup of Nigeria.

It is true that we take Nigeria's resilience for granted and we subject her to all kinds of pummeling but then if such be the path of our nation-building, then so be it. We are still a country trying to become a nation. Nigeria will definitely outlive all of us. In fact, I am not afraid for Nigeria, it is Nigerians I pity.

I have come to know enough of Nigeria to know that it will take more than Turai Yar'adua and her band of hangers-on to bring this country to her knees. Their game was so obvious even to a child right from the onset, what remained to be seen was how Nigerians would react to it.

We were not voted the happiest people on earth for nothing. We have learned the art of meeting our challenges with humor. The latest one was even very funny. It was like a game of draughts. For most of January the clique reacted to every single act of the Nigerian people:

- Every time Nigerians vowed to go to Court: Aondoakaa went to Court. The same court, mind you and gets the same judgment over and over again in such record time.

- When newspapers reported that Yar'adua was either dead or brain damaged, the next day, he gave an interview to the BBC Hausa Service in English.

Now, that interview has become their undoing. I remember that when he asked why the President would give an interview in English to an Hausa station, Aondoakaa said the transmission was meant for all Nigerians and not just Hausa speakers.

I agree that what we have is a political resolution and may not be the actual end of this logjam as it presents its own challenges. For instance, by this resolution - if we accept it for arguments sake - Nigeria now has two Presidents -though one is acting. Yar'adua never left power and Goodluck should be very careful what actions he takes. If he tries to remove Aondoakaa, Kaase will go to Court. Remember he was the one who got the spurious judgments from Abutu in the first place. All the same it is a step forward.

Now that the National House of Assembly has adopted the BBC interview as direct transmission by the President to it, I wonder how Aondoakaa will wiggle out of this.

Some lawyers have contended that an interview in which the President clearly declared that he was not well and fit enough to carry out his duties was not equal to a letter written to the Senate President.

That will take us back to square one.

No wrong done ever goes unrepaid.

I just read this after watching Soyinka on CNN giving his opinion on the situation in the country.

I agree with you on this... "that what we have is a political resolution and may not be the actual end of this logjam as it presents its own challenges."

I'm just too tired of this issue.. but I just have the honest believe that the country would not crumble under this.. I've even ignored the various stories.. life goes on jare.. When they're ready, they'd sort things out..
www.askchacha4free.blogspot.com

@rethots: karma is a bitch. many thanx.
@AlooFar: Its been quite a while. I think political or otherwise, at least they did something I never believed they had the balls to do. Dora probably gave them some balls. Next, is the ultimate act; Impeachment. Can they do it? Many thanx for your comments.

'a living dog is better than a dead lion'

aondoakaa must have believed that nigerians were no more than mere animals for him to come up with that bbc interview. His arrogance caused him to think that we would accept it and leave well alone.

He thought was being 'cunning as a fox'...he wasn't even close to being that sly...he was a trickster with donkey mentality and 'if u act like a donkey, then don't be surprised when people ride you'.
aondoakaa's arrogance got goodluck the 'acting president' gig.

Just read on sahara reporters that aondoakaa has been removed. He buried himself.

@2cute: If you leave them alone for long enough, they'll get to do the right things. Why don't I fully agree with that? Becos na Naija. Anything can happen. Many thanx.

@FlyingSnow: It was beyond Kaase. He was just the crude Mouthpiece and Executioner for the clique; the real mastermind is Turai.

Goodie Jo's latest move may be dangerous o. Remember that Kaase was the architect of the 'VP is already acting' buildup before even the Senate took up the refrain.

He was the one who got all the court judgments from Abutu that the Senate based its latest resolution upon.

I fear he can still do damage as long as he remains in the FEC (ECoF). He is the enemy within. Goodie Jo cannot sleep with both eyes closed.

Many thanx for your comments.

this is all very interesting, really. am not a political person, but even i can see that d storm is not yet over.

I don't know much about politics, but I do know that I have never heard of a situation where the head of state has disappeared for so long. Nawa oh. Even in a 9 to 5 job, he for don lose him job by now.

But I heard that Goodluck fired Aondoka. Wahala dey ooo.

Fela said it all in 'democrazy'

"conny man die, conny man bury am" used to be one of my grnny's favorite lines. Absolutely apt for the current situation.

This 'resolution' has k-leg, and we have to see where it leads us...