I was in the hospital yesterday with Wifey for ante-natal. They did all the tests and said everything was OK. At the scan session, they wouldn't tell me the sex of the child.

Why do Doctors in Nigeria do that?

They are just being careful someone told me. My friend Aristo was told after a scan that his wife was gonna have a girl but surprise, surprise, she had a baby boy a month later. He wanted to sue the hospital as they had gone shopping for girlie stuff. Probably had even started calculating how much he will be charging as bride-price when he launches an 'IPO' in about 18 to 20 years. Baby girl na big investment.

The wife claimed a miracle but the medical explanation was that due to the position of the baby at the time of the scan, it was impossible to see the penis so the Cuban Doctor declared the foetus a girl.

Its still a joke here.

I wished for a girl as my first child (for all the right reasons including the investment one) but after one very long discussion with my father-law, who had four daughters, no sons, I changed my plea to GOD.

'Na Boy!' was the text I sent out to everybody on my phone that day.

The man converted his whole house into a nursery for his grandson. If he had his way, Mak would live with him. He was happy. And I was happy he was happy.

On Saturday, it was (Senate President) David Mark, then (Governor) Theodore Orji. There had been several before them.

Today is 'Super Tuesday' in Nigeria, when the Tribunal will speak on the Presidential Elections.

I know Solomonsydelle will have something to say about this. Let me go read.
Posted by N.I.M.M.O at 9:51 AM 3 comments: 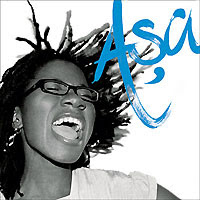 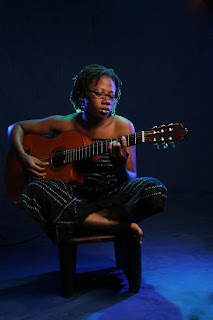 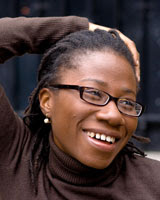 She looks like Tracy Chapman. Sounds like Alicia Keys/Corrine Bailey Rae with full amala flavour. (Probably on paraga or some other Yoruba concoction.)

I don't know why it took me so long to 'discover' her music given that I actually met her about two years ago but by then she was a novelty sort of, an unknown quantity then. Now I read some very good reviews about her on Youtube and all, the girl done done good. I even have her song on my phone as ring tone.

It was funny reading how she came by the name 'Asa' . Yoruba being a tonal language, the same word Asa (Asha) could mean several things depending on the tonal stress in pronunciation such as:

She uses the first one, meaning Hawk.

It is very rare to buy a CD and actually like all the songs on it but I am gbaduning this girl so much right now its unbelievable. All her songs just do me one way or the other but none like 'Bibanke'. And you can't but smile at the satire in Awe - a song about Waidi, son of Sekina, who impregnates a woman old enough to be his mother. Its been some time since we had an artiste who sings and the audience so connects.

Some critics and reviewers have translated the Yoruba word Bibanke (misspelled deliberately, I believe) to mean 'When I cry' but rather it means 'If i cry'. The Yoruba word 'Bi' as an adverb denotes choice while the adverb 'Ti' (as in Ni igba ti) denotes time. Thus 'When I cry' would have been 'Ti m'ba n'ke' and 'Bi m'ba n'ke' is 'If I cry'.

Q: Nimmo.
A: Ehn?
Q: Who send you all these Yorubanalysis you are doing now?
A: Abeg, no mind me jare. Na so e dey do me sometimes. Asa, joo gbe'lu soke! (Asa, raise the beat)

I must ask your forgiveness for taking so long to update and particularly to Afrobabe, QoMC,DL, RDiva, TDiva, Indy and others who had asked me to update but not write about football.

Well, I am updating but its a football update. The original title of this post was to be 'Fare gut, Herr Vogts' (Farewell, Herr Vogts), but I couldn't resist the above. So please Baby, just one more time .....

Just in case you don't know yet, Bertie Vogts is no longer the Coach of Nigeria's Super Eagles and thats official. There are conflicting reports whether he resigned or was asked to resign or was fired. Any which way, he's out.

When I wrote about this after our loss to Ghana, I didn't know it would turn out to be rather prophetic, I was just writing out of my own disappointment and I know Nigerians don't like being disappointed.

While some say he did his best with the team and all that, the basic truth is just that Vogts was not the right man for the job. There was no fit. Someone summarized it thus in the Guardian of today:

'Vogts is a typical German. He was able to instill some discipline in team but did not properly understand the mentality of the African player and how to bring out the best in him...'. Just like I said.

Its no longer news that Nigeria has crashed out of the 26th ACN in Ghana and to Ghana's Black Stars.

The Fourteen Years Theory was beginning to look good after Nigeria was able to qualify from the Group stages due to a fluke. Several commentators had gone to town with all sorts of permutations both logical and illogical- and trust us Nigerians, we love to make up good stories.

One particularly good one was about 'Injured Skippers' that goes thus: It somehow was revealed that at the 1980 ACN Skipper Christian Chukwu was actually nursing an injury but because of his enormous influence on the players - most of who were from his Rangers International FC, Coach Otto Gloria had to keep him on the team and he played all the matches in the ACN that year when Nigeria won.

In 1994, Skipper Stephen Keshi was injured even before the ACN in Tunisia but because of his charisma, the Coach Clemens Westerhof put him in the team and actually dressed him for all the matches even though he never got to kick the ball. He was always in track bottoms until the last match when he took them off and collected the Captain's band from the substantive captain Austin Eguavoen in order to receive the trophy.

In 2008, Skipper Nwankwo Kanu was injured in the very first match against Ivory Coast and he was not likely to recover anytime soon. Presto! That was all that the Fourteen Year Theorists needed. Notice that Kanu was actually dressed for that match against Ghana even though we all knew he could not play. Probably as a psychological tonic for the boys.

But alas! The Fourteen Year Theory failed. Nigeria crashed out for the first time at the quarter-finals of an ACN.

The match itself lived up to its billing. It had been tagged The Fiftieth World War (WW50) by the press. It is the fiftieth time Nigeria and Ghana would be meeting in a football match both competitive and otherwise. And every time the two sides meet, it is war! There is nothing like a 'friendly' match between Nigeria and Ghana. The rivalry is so intense that many Nigerians are actually relieved that we lost to Ghana and not any other team in the competition. 'Our time will come' is the consolation. As it stands now Ghana has won 18; Nigeria won 17 with 15 drawn games. It was 17-17-15 as at kickoff. I sincerely don't know where they got these stats but it was repeated several times during commentaries.

I'm pretty sure Herr Berti Vogts did not know what he was getting himself into when he took this job but now he should have an idea. One could notice some changes in the pattern of play particularly after the Mali misadventure when Nigeria fielded a whole 5 (five!) attackers while Mali fielded five midfielders and none of them could find the goals! It was laughable!

I had never thought I would live to see the day that Nigerians would rejoice over defeating their Beninois neighbors by a mere two goals to nothing but saw it I did. Nigerians actually popped champagne because of that. I mean, just when did we come to this? Its a scandal!

If I was impressed by the little improvement in the team after they reverted back to Wingplay, it was shortlived because of the horrendous changes made by Herr Vogts.

It was a delight watching Osaze Odemwingie running on the flanks in the match against Ghana. The Ghanaians had a tough time keeping up with him and he switched from the right to the left so often that he frustrated the Ghanaian captain John Mensah into committing a red carded foul. The new boy, Uche Ikechukwu was also a sensation. Thank God the Spaniards did not get him to play for them. It would have been a great loss to Nigeria.

Danny Shittu was very mobile even with his bulk and he was very good at checking the Ghanaian attackers. One would have loved to see him more in a libero role but he had to fall back too often to cover up for Taye Taiwo. And the bros in the middle that was supposed to do the finishing was absent most of the time except when Uche presented him with a penalty kick to score from. Yakubu Ayegbeni was a disappointment.

What we need is someone in the mould of a Rashidi Yekini, a finisher par excellence or even a Victor Agali. Someone with a nose for goals. Ayegbeni seems only to perform against slow defenders and Martins was just not effective in Vogts 4-3-3 pattern. Mikel Obi was very effective in the middle and Dickson Etuhu was also very effective as his silent assistant though we didn't notice that until when Etuhu was injured.

Against a formidable midfield with Michael Essien, Sulleyman Muntari and Gyang, it was not a mean feat for the young men to cope and contain the Ghanaians but when Etuhu had to go out,(the game was at a 1-1 draw and we obviously needed more goals) and Herr Vogts replaced him with Richard Eromoigbe, a defensive midfielder who actually played right full back at the last ACN - I wondered 'What was he smoking?'

When we were one goal behind, (and the Ghanaians were down to ten men) he removed Mikel Obi and brought in Obi Nsofor who really had no role to play in the match, the guy just kept running around (I don't want to say like a headless chicken). Even Kanu was disgusted, you could see it on his face. I mean, where did they get this guy from?

Take nothing away from the Ghanaians. Michael Essien was a very effective leader in the team even before he put on the captains band and when he moved back to replace the ousted J. Mensah, I was expecting the Eagles to over run the midfield by simple majority but Essien did a yeoman's job there. I was impressed.

Even that Ghanaian joke called 'Junior'Agogo stepped up his game a notch against Nigeria. The commentators had said what Agogo lacked in technique he made up with 'gra gra'. His 'gra gra' eventually paid off as he scored the second goal from beside a flat footed Taye Taiwo.

As for me, immediately the referee raised up his hands and blew the final whistle, I just switched channels to watch 'Desperate Housewives' Season 4.
Posted by N.I.M.M.O at 6:05 PM 23 comments: