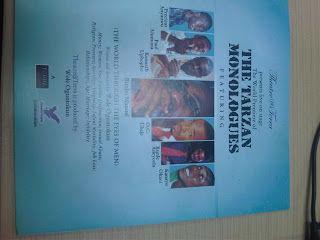 So I finally went to the Theater@Terra with Madam to see the Tarzan Monologues.

Yeah, I know. The whole world and his wife had already seen it.

We were probably the last couple in. We had to attend an Uncle's 40th wedding anniversary (yes 4-zero) and thus missed the 3 o'clock show. We barely made the 6 o'clock.

I finally saw Laspapi. No, I did not get to meet him. He was just too busy. I think the guy took on too many roles.

Writer, Producer, Director, Ticket seller, Ticket puncher, Doorman, Compere, Show Opener, Show Closer. etc etc etc. I know the budget was tight but there must have been other guys who could do other things.

But the show must go on.

The show itself was superb. I cannot now say whether it was superb acting or superb directing. I think all the actors gave a good account of themselves. But then, the play itself was very well written. An actor's delight, you might call it. Allowed them a lot of freedom to express themselves.

All the monologues were well delivered.

And the 6 Myths About Marriage , Madam would not let me hear the last of them. Particularly the 6th one.

We got home quite late last night. We went elsewhere after the Monologues.

My mother was with us. She had come for her brother's wedding anniversary. And she asked me. Remember, there were two of us who came home late but she asked me:

Why Do Women Have Sex?

Even in a study conducted by women on women, it still comes out that no one but NO ONE can understand women.

In the online survey of 1,000 women aged from 18 to 87 by Meston and Buss, as reported by Deborah Kotz in the USNews, you would have expected to get simple straight forward answers like for procreation, or for pleasure but the number one reason women have sex is ... wait for it ...... because they are attracted to their partners!

What has attraction got to do with anything? Hey, what do I know, I'm just a man abi? Lower down the list were reasons connected with love and emotional bonding.

There were other reasons too:
- to bring them closer to God. Really?!
- to get back at partners who weren't faithful by having sex with someone else.
- Competition 'Gotcha' sex: who gets him first!
- to get another notch on their belt, which we typically think of as something men do.
- to get rid of their virginity. O m'eziokwu!
- Sympathy sex" because they felt sorry for their mate. The poor guy will NEVER hear the last of it.
- Economic Exchange sex to land a job or promotion or to get money or drugs. OK.OK.OK.

But you will not believe that after all these confessions and enlightening revelations, the authors still arrived at some very strange conclusions like
" .... we see that men are still more likely to engage in uncommitted sex, like one-night stands .. "
"... more women still make the connection between love and sex..."
"... men are definitely more willing to have sex because of physical attraction ...". W-h-h-a-a-a-a-a-t?!!!

Anyway, was it not a woman who said that men are dogs because they sleep around. As if they sleep with goats.

And this lie that women make the connection between love and sex should stop o. If this were so, why do men fall in love with prostitutes? Hello, Pretty Woman!
Posted by N.I.M.M.O at 11:48 AM 7 comments: 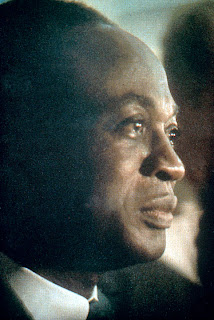 I had wanted to post this on Nigeria's independence day but somehow work got in the way and I could not.

Monday 21st September 2009 marked the centenary of the birth of Osagyefo Kwame Nkrumah and the government of the Republic of Ghana actually declared a year-long celebration culminating on the anniversary of the birthday of its first Prime Minister and President.

The more I read about this remarkable African, the more I appreciated why Ghanaians celebrated him thus.

I got an audio copy of Nkrumah's 'Africa Must Unite' speech at the founding of the Organization of African Unity in Addis Ababa 1963 and I could not but marvel at the profundity of his vision. His vision, as expounded at the summit was obviously very far ahead of his time. Also, his speech at the United Nations in 1960 was a masterpiece in all respects and must have been seen as a sort of 'bring-it-on' by the Western powers at that time.

As a Pan Africanist and leader of an independent Ghana - Africa's first independent nation - Nkrumah's major preoccupation was to encourage the other African countries to continue to demand for independence and he did this with a swagger that was infuriating to the colonial powers, particularly France which did not seem to have had any plans to leave its African colonies - even till today.

Nkrumah looked to Nigeria even at that time to become an African regional power given its sheer size and resource wealth but the Nigerian leaders at that time were very suspicious of his intentions and also of themselves.

Zik, his fellow Lincoln University alumnus and Pan-Africanist, had found himself in the position of a ceremonial President that was powerless and limiting while Awolowo appeared content just playing his politics locally.

As far as the pan-africanist agenda was concerned, Nigeria was of no use. Of all his seminal speeches however, the singular statement that Nkrumah made that was of significance to the Nigerian government of Prime Minister Tafawa Balewa and most Nigerians of that time was the one about Nigeria being ' ... big for nothing ..'

Domestically, Nkrumah ran a unitary government in Ghana in spite of it being composed of up to fifty different ethnic nationalities. He believed more in a federal Africa with the countries as the federating units than in a country with federating units. He practically forced Ghanaians to inter-marry and live outside their native environments.

Achievements were purely on merit. The whole of Ghana competed with itself. No 'local champions'. No 'catchment area'. No 'quota system'. His style of government is credited in part for the unity among Ghanaians till today.

Comparing all these with Nigeria, I just could not help but wonder where we got it wrong.

I could not help but think; Maybe this federalism is just over-hyped after all.

Maybe Nkrumah was right after all.