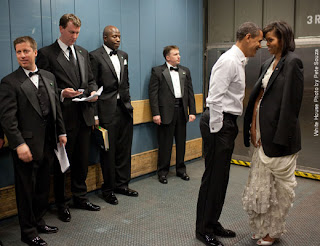 Yeah, I know the inauguration is long past and the guy is already busy at work but this is a so very nice picture. Its been on my desktop for some time now. Notice the Secret Service agents and aides trying not to look too embarrassed or looking away.

Someone was obviously trying to get lucky that night and someone else couldn't wait to get out of that dress. They say power is an aphrodisiac. Stronger than burantashi. Stronger than Viagra.

Did you see them practically smooching on the road to the White House? Just to walk a few blocks down Pennsylvania Avenue and wave to people they were doing 'Love in Tokyo'. I doubt if any other President has done that in history.

The way these two are going ehn, Malia and Sasha may have a brother soon.

Tell your Senators and tell your Reps: Legalize It!

Obviously Peter Tosh did not have this information or the song could have been a bit different.
' ... even Queen Victoria smoked it,
... You gotta legalize it: Don't criticize it
.... Legalize it, yeah, yeah and I will advertise it ....'

If it is good for tuberculosis and 'maracobosis' what is menstrual cramps?

'What do you mean 'is it medical?' Where's Naapali when you need him?

The One State Solution

It may not be new but it is very interesting that a most audacious solution to the Israeli/Palestinian problem is coming from no less a person than Muammar Gaddafi of Libya.

Gaddafi proposes a one state solution for all within the pre-1948 borders of Palestine (which is the original name of the land) to contain the Israelis and the Arabs probably in a loose federation of sorts.

" Although it’s hard to realize after the horrors we’ve just witnessed, the state of war between the Jews and Palestinians has not always existed. In fact, many of the divisions between Jews and Palestinians are recent ones. The very name “Palestine” was commonly used to describe the whole area, even by the Jews who lived there, until 1948, when the name “Israel” came into use.

Jews and Muslims are cousins descended from Abraham. Throughout the centuries both faced cruel persecution and often found refuge with one another. Arabs sheltered Jews and protected them after maltreatment at the hands of the Romans and their expulsion from Spain in the Middle Ages.

The history of Israel/Palestine is not remarkable by regional standards — a country inhabited by different peoples, with rule passing among many tribes, nations and ethnic groups; a country that has withstood many wars and waves of peoples from all directions. This is why it gets so complicated when members of either party claims the right to assert that it is their land."

Following the unprecedented double unilateral (definitely not bi-lateral since both sides did not meet to agree) cease-fires almost simultaneously declared by both Israel and Hamas, I really will want to know: Who Won?

Hamas says they did.

"The enemy has failed to achieve its goals," Ismail Haniyeh, the top Hamas leader in the territory, said in a speech broadcast on Hamas television.

That is equal to a victory. QED.

It's strange however that it was the Hamas leaders who were safely ensconced in Syria and Egypt while the hostilities lasted who crowed loudest about the 'popular victory' over Israel.

Unfortunately, nobody asked the 1, 292 Palestine Arabs who made up the body count.

Israel says they did.

"All of our goals have been achieved successfully. Hamas was beaten." He added, "If Hamas decides to keep shooting, we're ready to strike back forcefully."

Nobody asked the 13 Israelis who died.

So what happens next?

Naturally the world would rally behind the Gazans to rebuild their infrastructure and their lives. Money will be pumped into their economy and houses will go up again and after some time, life will continue like it should.

Hamas will keep winning elections in Gaza and maybe even the West Bank. The home-made bombs will continue to fall on Israeli cities again and Israel will make some for about 5 years then they will attack again and then we will all shout again and .....

The cease-fires practically guarantees that Israel and Hamas are destined for another bloody brawl. And once again, the victims will be the Palestinian civilians whose streets and homes in Gaza are turned into a battleground.